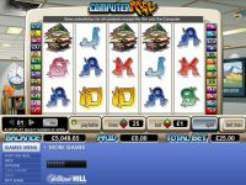 Play Now
Computer Rage Slots is a state of the art five reel bonus feature slots machine. One of the most unique features of this particular game is the extraordinary betting range. Players can bet as low as a penny and as much as $500 per spin! That is unheard of in the online gaming world! The number of options in this game is truly exciting!

The Wild Symbol in Computer Rage slots is the Boss who can be swapped for any other symbol to create a winning combination with the exception of the Scatter symbol. It also can not be used for the Smashed Computer Bonus feature or the Computer Rage Bonus feature. The Scatter symbol is the Computer symbol and you can win with this symbol even if it shows up on a line that is not enabled. As long as you get two, they can be anywhere. But…if you get three or more Computers, you activate the Smashed

Computer Rage Slots Smashed Computer Bonus & Computer Rage Bonus Game During the Smashed Computer Bonus Game you get the joy of smashing computers with Sledgehammers. Every computer smashed gets you a win! The Computer Rage Bonus Game is activated when you find the Boss on reel one and the Secretary on reels four and five at the same time. Remember…this game has rage in the title so of course in this round you will toss computers from office windows but you get to pick the windows…pick the right windows and they will reveal your prizes. Each time that a computer is thrown from the window that window will reveal the Bonus Prize based on each shattered computer.

A Stapler, Files, an ID Badge, and the standard playing card symbols, Ace, King, Queen, Jack, Ten, and Nine are all part of the standard symbols in Computer Rage Slots.

For your gaming convenience Computer Rage offers the Auto Play option. This is a great feature that makes your game play a lot easier. You can set the feature to play for as long as you want based on wins, time or money spent.

Where to Play Computer Rage Slots